Carpenter Ants
The carpenter ant belongs to the genus Camponotus.  This pest is found widely in the United States and is one of the largest of our common ants.  Carpenter ants are so-named because they excavate galleries in wood to create nest sites.  They use their strong jaws or mandibles to remove wood as they enlarge the size of their nests.  Unlike termites, carpenter ants do not consume wood.
The adults vary in length from 1/4-inch for small workers to 3/4-inch for a queen. Carpenter ants are the largest ants in the United States.  Size alone is not a good diagnostic tool for an inspector because carpenter ants from a single colony are polymorphic or of different sizes.  Polymorphic workers are sometimes called minor, intermediate and major workers (from smallest to largest, respectively).
The body may be black, red, brown, tan, yellow or some combination thereof, depending on the species.  They are typically dark brown to black in color. In some states, such as Arkansas, some species are both red and black.
Workers have strong mandibles and can bite if they are handled.  In addition to delivering a painful bite, they can also inject formic acid into the bite area.  Ants do not have a stinger. 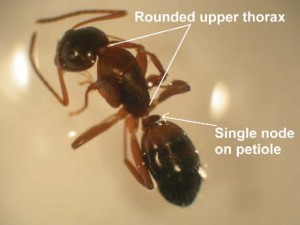 Carpenters ants have an evenly rounded, arched thorax that can be identified when viewed from the side, one node between the thorax and the abdomen (gaster), and some hair around the anal opening at the tip of the abdomen.  The combination of the first two characteristics is useful to distinguish carpenter ants from other ant species.  Carpenter ants do not create mounds in the soil, although Formica ants behave in such manner.
Carpenter ants often establish a number of interconnected nests; the parent nest houses the queen and small larvae, and the satellite nests contain larger larvae and pupae. The parent nest of the black carpenter ant is typically established in a cavity of hardwoods but sometimes in softwoods. The nest is associated with wood that has a moisture content greater than 15% that is often the result of rain, leaks and/or condensation in structures. The satellite nests are usually located in drier areas with higher temperatures that enhance larval and pupal development. The workers can move the brood among the satellite nests. There may be several satellite nests in different locations in or around a structure.
Carpenter ant nests can be found outside or inside a building. They have been found in water-damaged wood around skylights, in chimneys, rain gutters, window and door frames, and wood shingles, as well as inside hollow porch posts and columns, window boxes, crawlspaces, and damp attic spaces, and even inside dishwashers. Sometimes, nests are found in dry areas, such as hollow veneer doors, curtain rods, small voids between the door casing and ceiling, false beams, and under insulation in attics and crawlspaces.
An active colony may produce a distinct, dry rustling or crinkling sound. Sounds of their chewing activity in wood are often loud enough to hear. The worker ants may respond to a disturbance by striking their mandibles and abdomen against the gallery walls so as to warn other colony members. Carpenter ants are most active at night. Large numbers of foragers emerge very soon after sunset to search for food. Foraging ants bring food back to the nest to feed the larvae. Carpenter ants are omnivorous, and they feed on a great variety of both plant and animal materials, including insects (living and dead), plant juices, fresh fruits, honey, jelly, sugar, syrup, meats, grease and fat.
Carbohydrates are the primary energy source for adults (or workers). One of their most common, readily available foods is honeydew, which is a sugary substance excreted by aphids and scale insects feeding on plants.  Landscape plants infested with these plant-sucking insects are a good place to inspect for carpenter ants. Carpenter are particularly fond of sweets.
Workers may search for food as far as 100 feet away from their nests.  Ants may be found outdoors traveling from a tree cavity or stump to the building. They may travel over tree branches or vines touching the roof, electrical and phone wires, fences next to the house, piles of firewood, logs, or debris. They may be seen walking on plants, tree trunks and rotten wood stumps. They frequently travel along well-established trails between nest sites and feeding sites.
Carpenter ants seek soft, moist wood in which to establish their nests; they preer wood that has weathered and has begun to decay. Although the nest is most often built in the soft wood, later excavations frequently are made into perfectly sound, dry lumber. Carpenter ants can be found in porch columns and roofs, windowsills, hollow-core doors, wood scraps in dirt-filled slab porches, and wood that’s in contact with soil.